Hello everybody!
Again some more time has passed than planned. Sorry for my silence, but the Corona-chaos ate up lots of RL time here and my progress with this project was slowed down. But here and there I did work on it. So here is an overview:

Shadows:
Due to the complexity of the models, shadows have been an issue. So, as in “my” Witcher 1-Wyzima-project, I decided to go for shadow boxes / shadow meshes. With this, I cut down on the number of objects/faces, which create a shadow und thus better the performance and it is a good way, that the shadows itself look good.
So, I basically reduced the number of objects, which cast shadows, per group to the building(s), platform, walkways, chimney(s) and the tree.

These are my steps:
1. Remove everything from the group except the needed meshes.
2. Remove the textures and join the mesh parts, which belong together.
3. Weld the verts within these objects.
4. Sometimes simplifying the object a bit.
5. Place the pivots within the meshes.
6. Set them to render NO and shadow YES.
7. Export the object onto a test feature and place that into areas with all four possible rotations.
8. To be on the safe side, I check the tree alone and then the house/platform as a combo (= separate exports as test features).

Here is a Gmax-screen of the shadow meshes of the Tass-group: 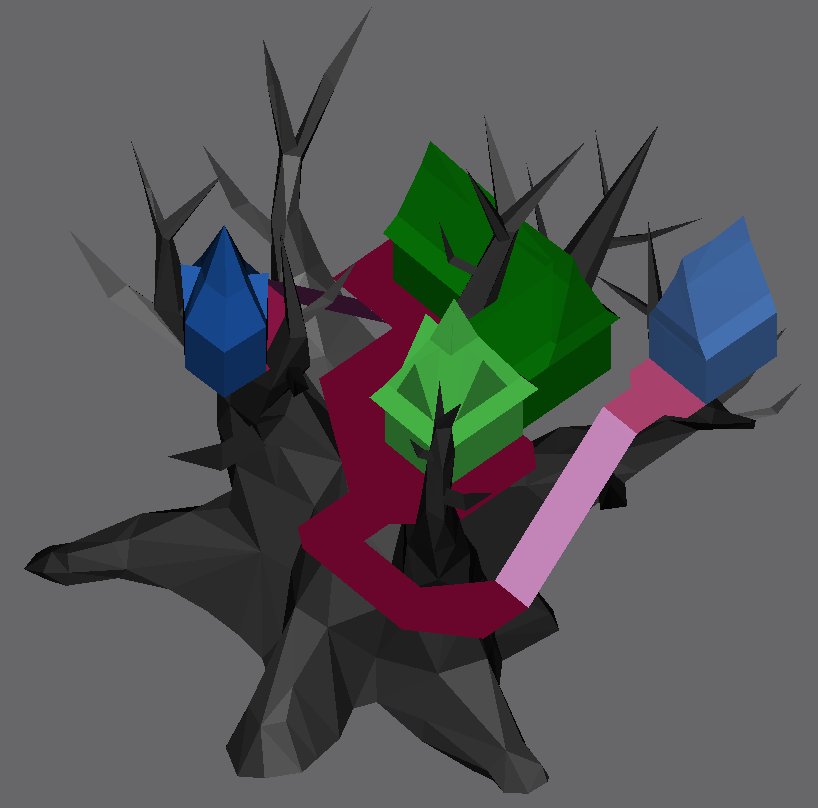 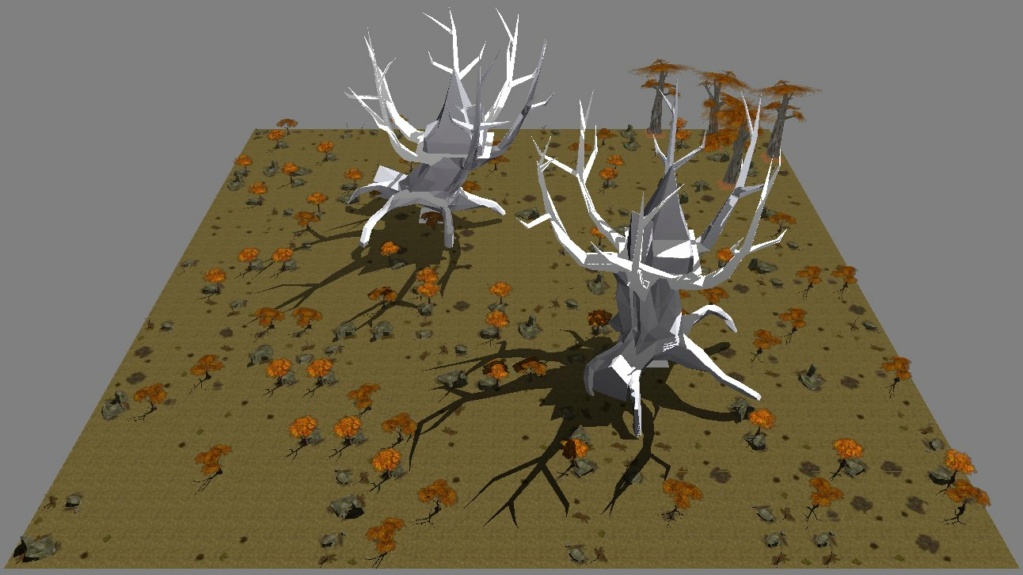 Meanwhile I managed to create shadow meshes for ALL tree houses. I do have a shadow-issue with the bridges leading away on a couple of groups, but besides that, they’re done (regarding the shadows).
Next will be the connecting bridge walkways (see post http://harvestmoonconsortium.com/forums ... 130&t=2822)


A chimney for the Inn:
Since creating these shadow meshes and all the separate testing is not much fun, I spent some time on another thing, that bothered my: The exterior of the Inn of the last Home doesn’t have chimneys!
So I searched for references, but I found no exterior drawing of the Inn with a chimney showing! Well, there is one with many small ones, but that didn’t fit my further surveys:

The DLA interior shows 2 fireplaces, which is true to the books and the atlas of Krynn (and makes sense). 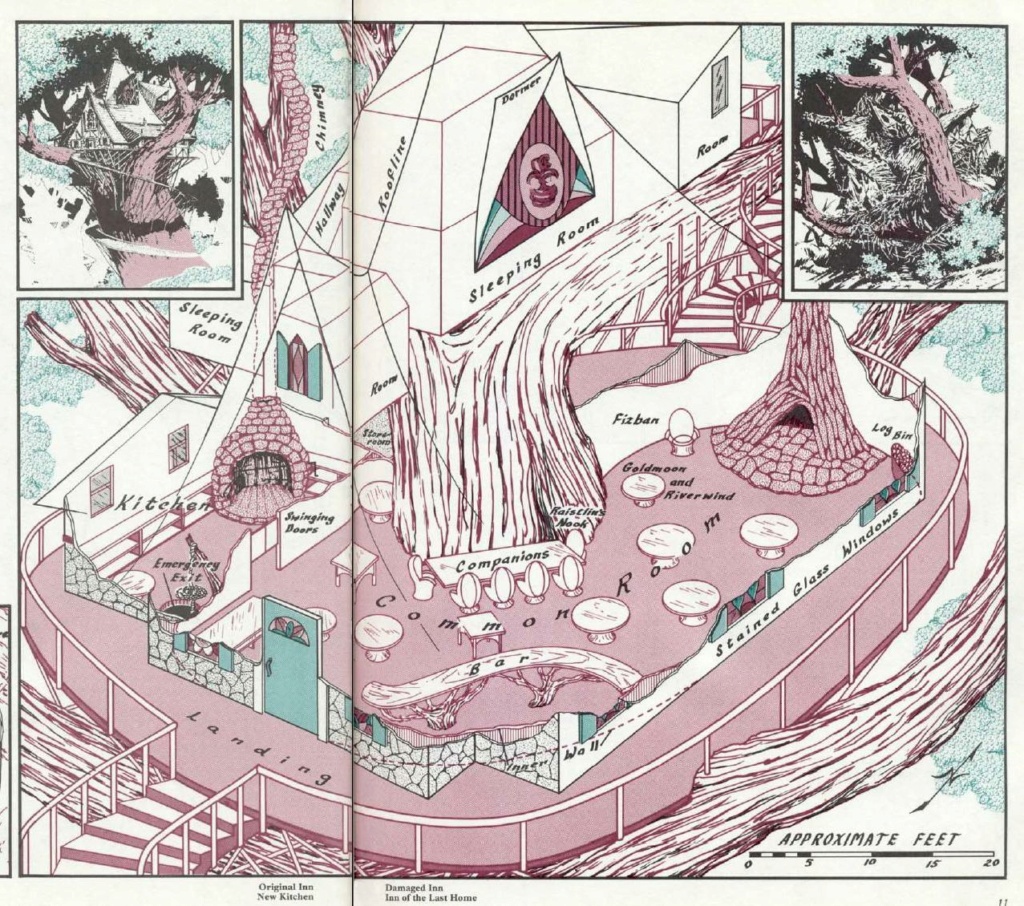 Source: the Atlas of the DragonLance World (TSR 1987) 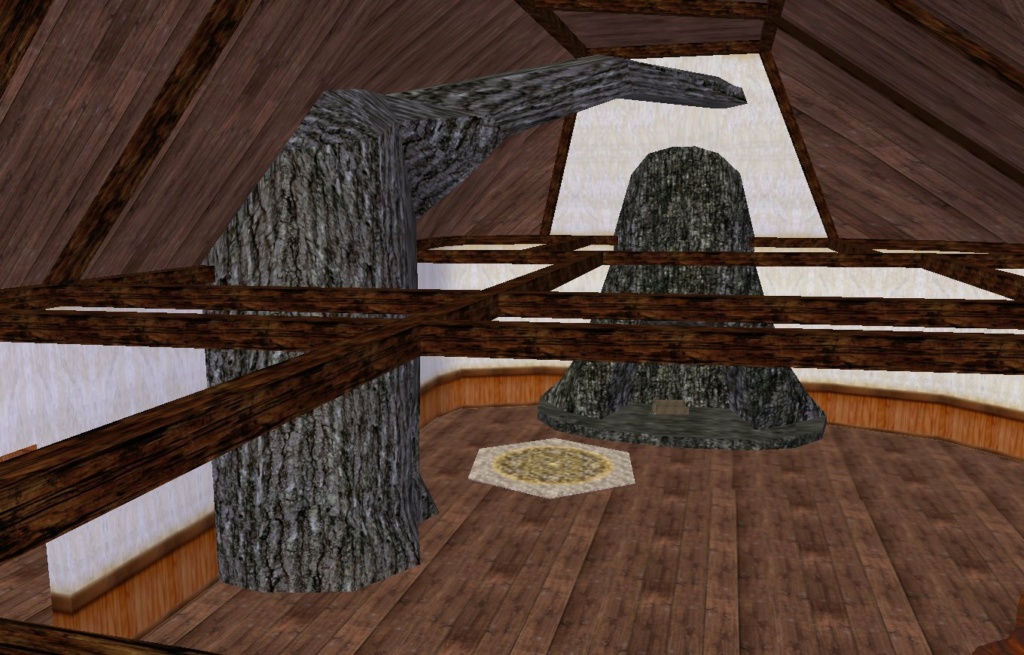 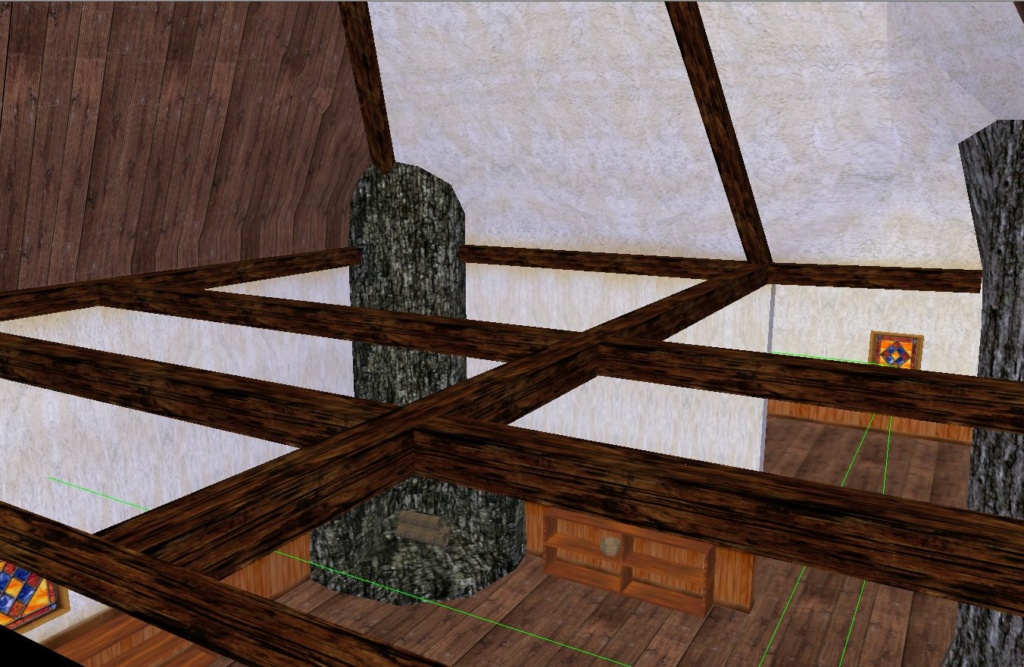 So it makes sense to add them to the outside, too. Notice the branch going through the wall in the common room picture? Now here is another problem: On the outside at the spot, where - I assume - the chimney should be, is a branch sticking through the roof (see interior screens): 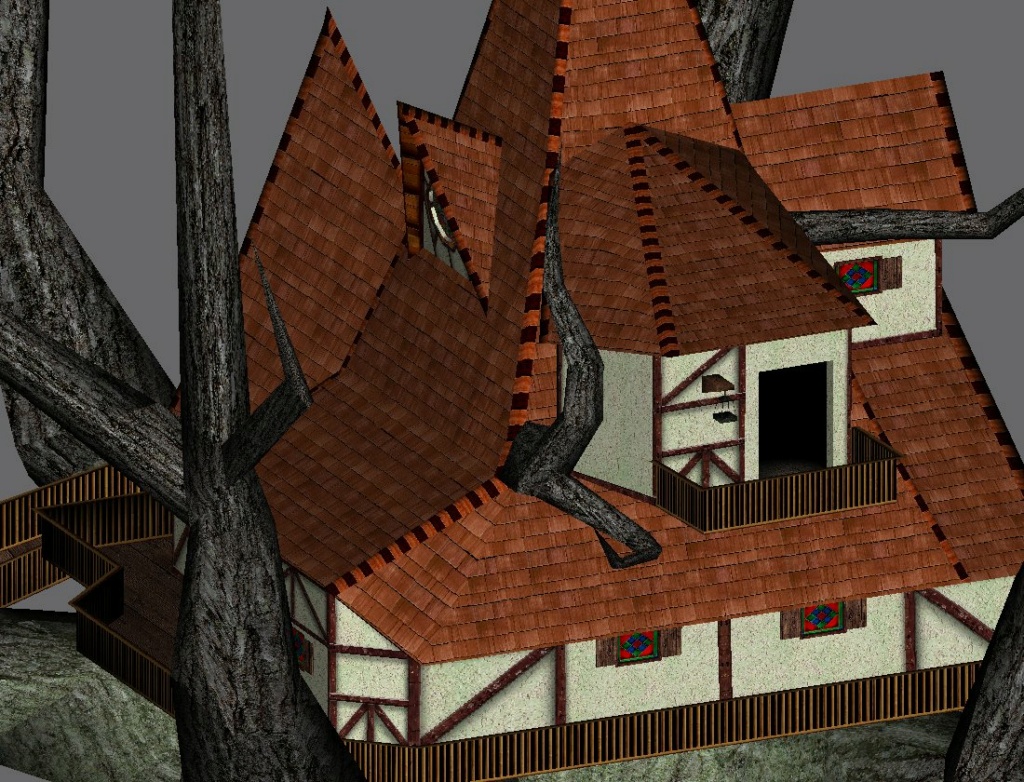 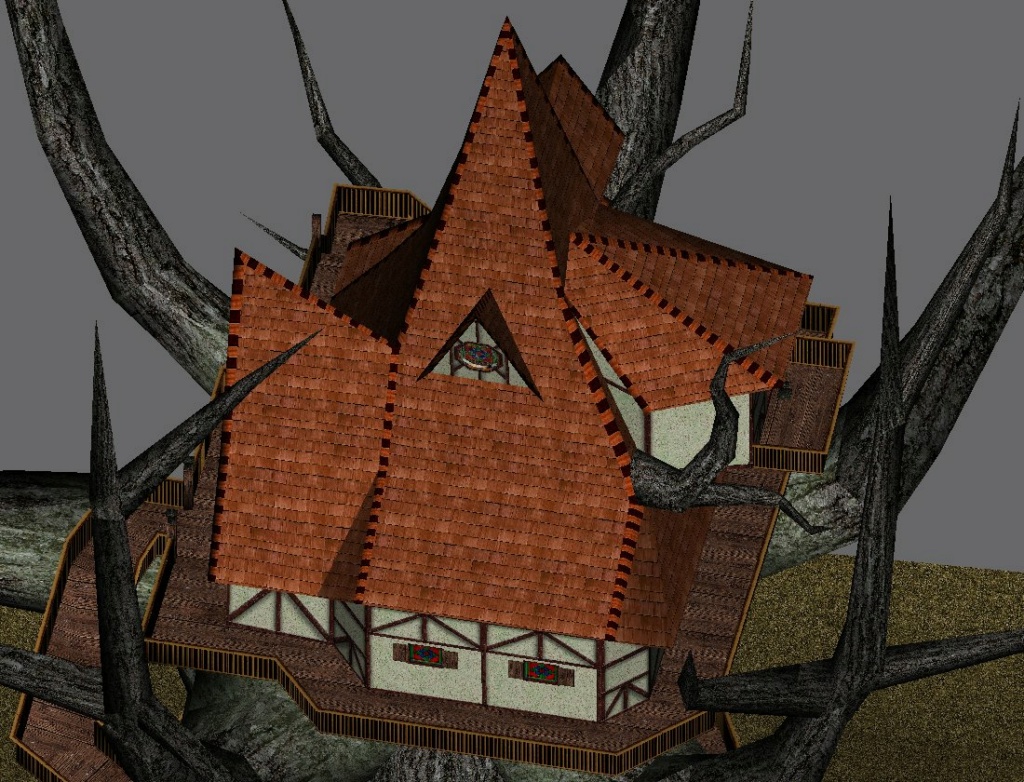 So, I’ve been tinkering a bit with the common room chimney: To stick to DLA-creations, I used the chimney of the smithy’s workshop, reshaped it a bit and placed it at the - I think - right spot on the exterior of the Inn. Doing this, I also had to move the branch, so it comes out of the roof next to the chimney. So, this is, what I came up with: 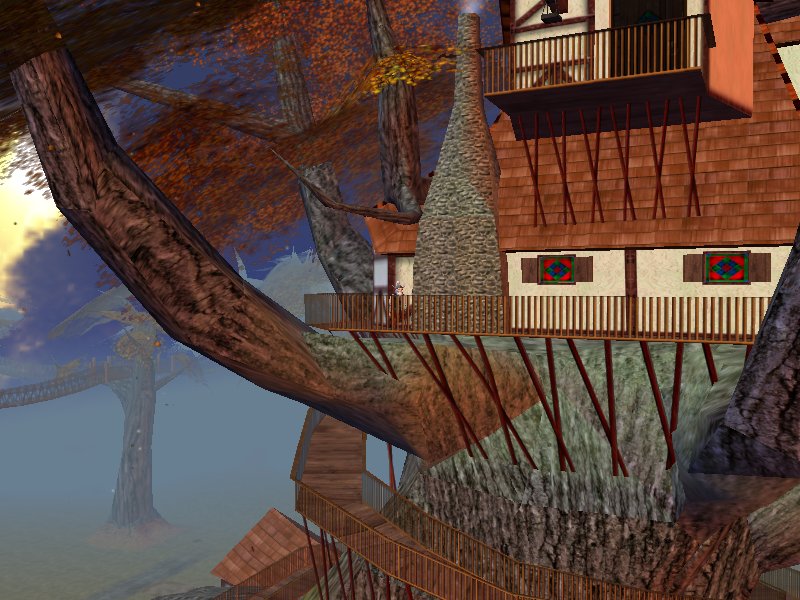 The longer I looked at this, the more I thought, it was too squared and massive at the bottom. So I took another approach: I made a copy of the interior fireplace mesh and reworked it, so it would fit onto the outside. The result looks like this: 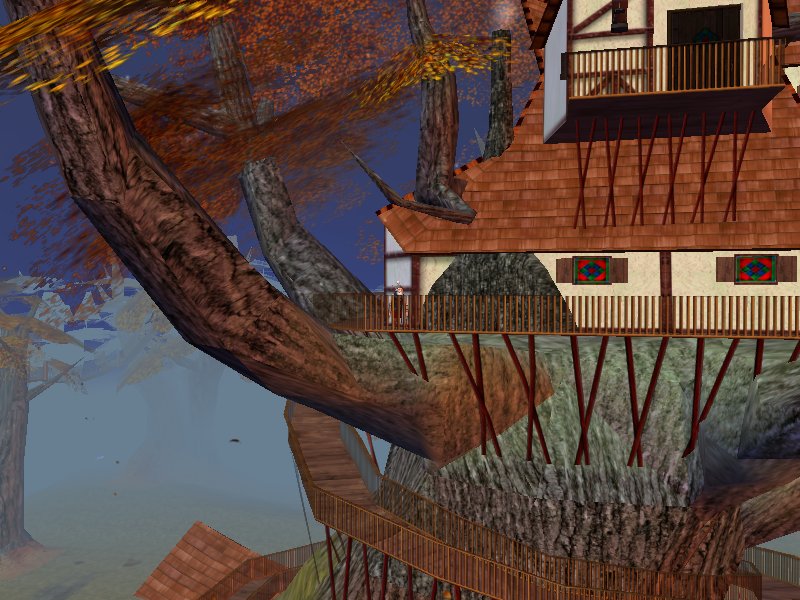 Now it uses the same texture as on the inside. A bit of UVW work, but else it looks good - IMO.


The riddle of the unknown group in a wallpaper picture:
This missing Tanis-group still bothers me! You might remember the post on “Lost, lost, …” where I posted a picture with a group I couldn’t identify? (see http://harvestmoonconsortium.com/forums ... 130&t=2737) 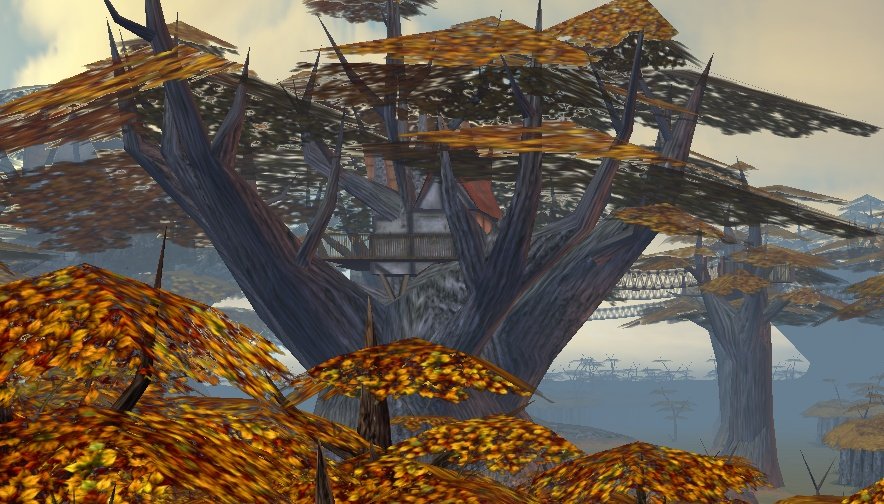 Well, one day I took the time to eliminate covering elements and mended parts, which were hidden. The result was this: 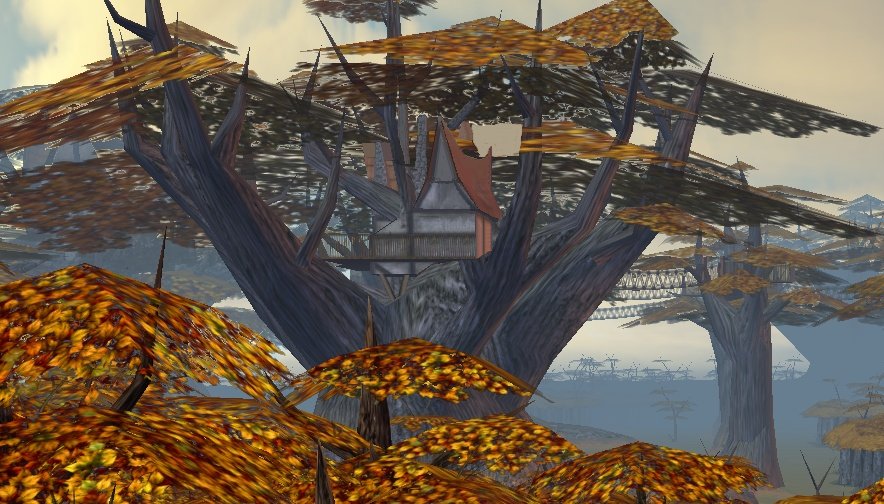 I was now able to identify the building and - sadly - it isn’t Tanis, because it’s… 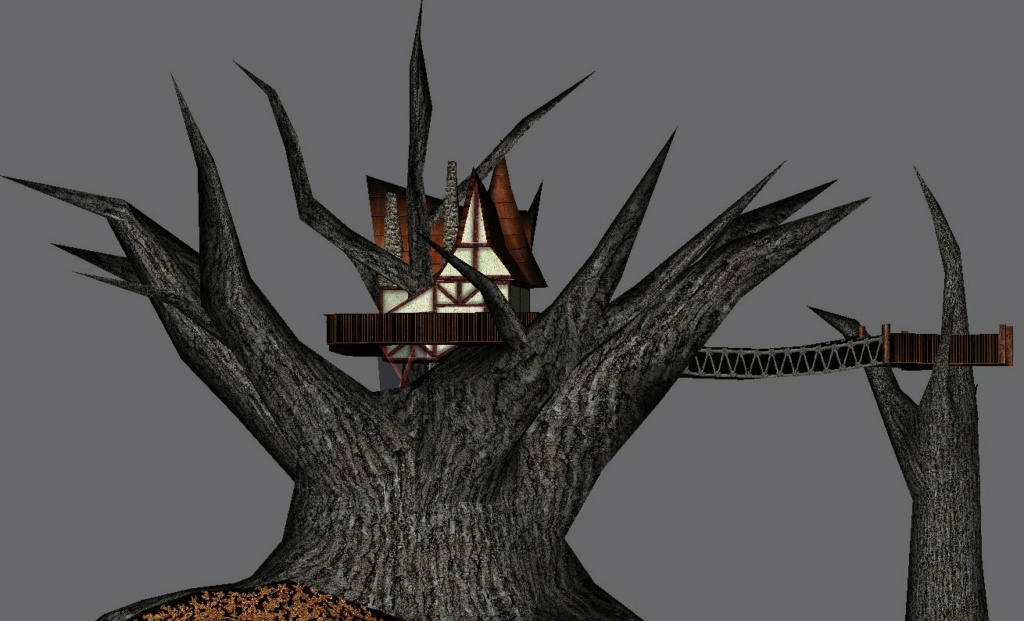 Well, it’s itching in my fingers to try to recreate Tanis using the interior as a base. I made a few rough tests with Tika, because here there is the exterior AND the interior, but there isn’t really anything to show, yet. And I want all the shadows done first.

That’s all for now! Thanks for checking this post!
Top