Since I’m at it, I continue with doing some “work in progress” posts on the mill group.
As written in some other posts: It was a VERY rough finding - even more rough than Meggins: It kept on exploding on me, because, because the transforms on many objects have not been applied. Sometimes the Gmax-function would work, sometimes is did not. Especially the tree gave me a very hard time! So, after some fiddling, I got all the transforms applied - back then, when I checked this group out for the first time (2014).
Also, it did not have any texture references and no walkmesh. Here is a screen: 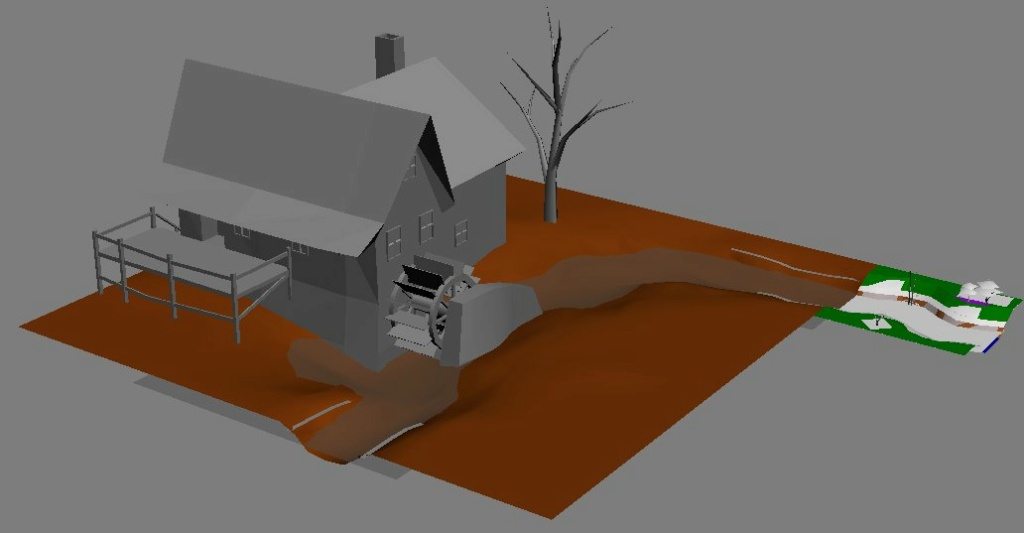 Since textures are a riddle, those you’ll see in the following screens, are just some tests - nothing set in stone, yet. So here is an early IG-test-shot: 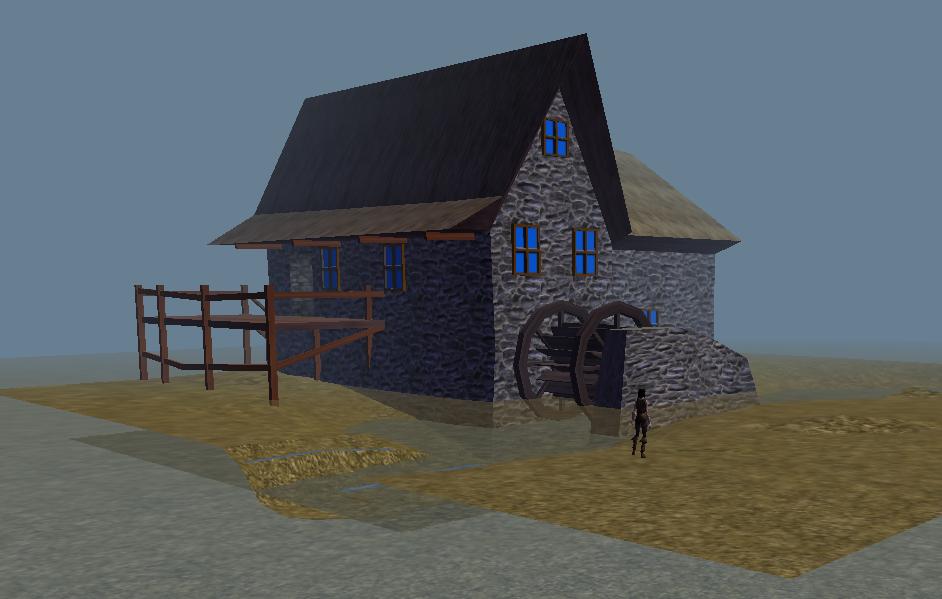 This is from 2014. As you can see, the tree is missing. Well, after the recovery, I “worked on other things and gave the tree another try in 2017: 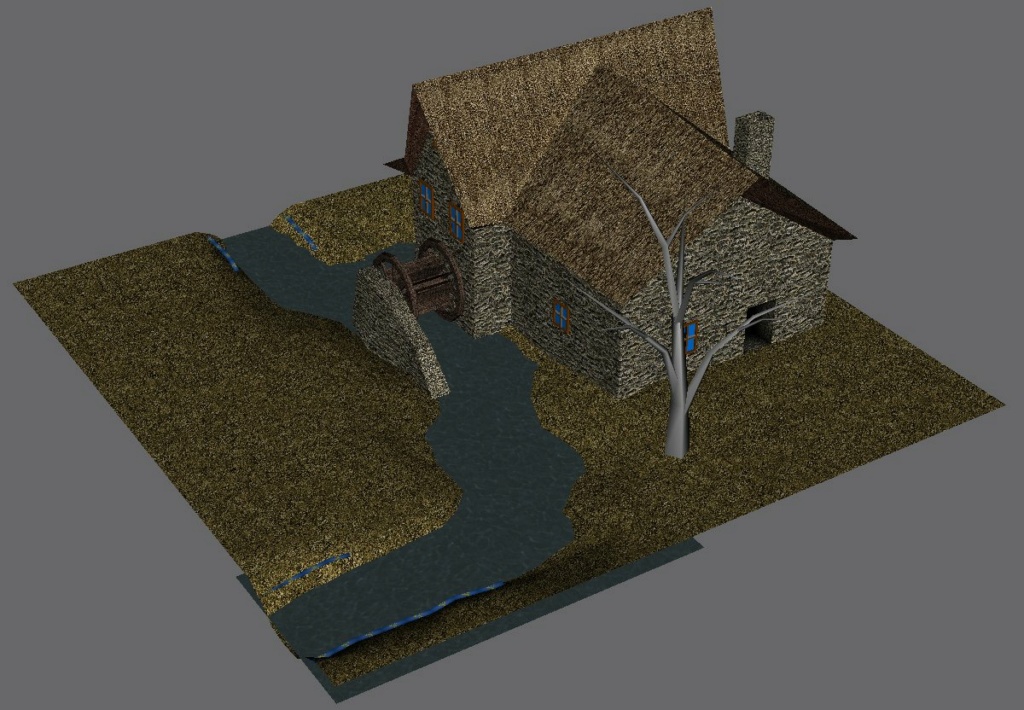 Remark: In the following screens, sometimes the tree is missing again, because of the “dirt-idea” (see below) and I plan to add it at the end.

All these scenes don’t have a “real” walkmesh - just simple plains to make the model work IG. So now I picked up on this group again. First step was to create the “real” walkmesh. For this, I actually switched to Blender! With one more exception - an UVW-fix on some of the diagonal bridges, which was too much of a paint to align it in Gmax - all model work of the Solace set has been done in Gmax! But Blenders mesh cutting tools are far more convenient for this job (IMO). So I ported over the ground plane and the major geoms to Blender. The result looks like this: 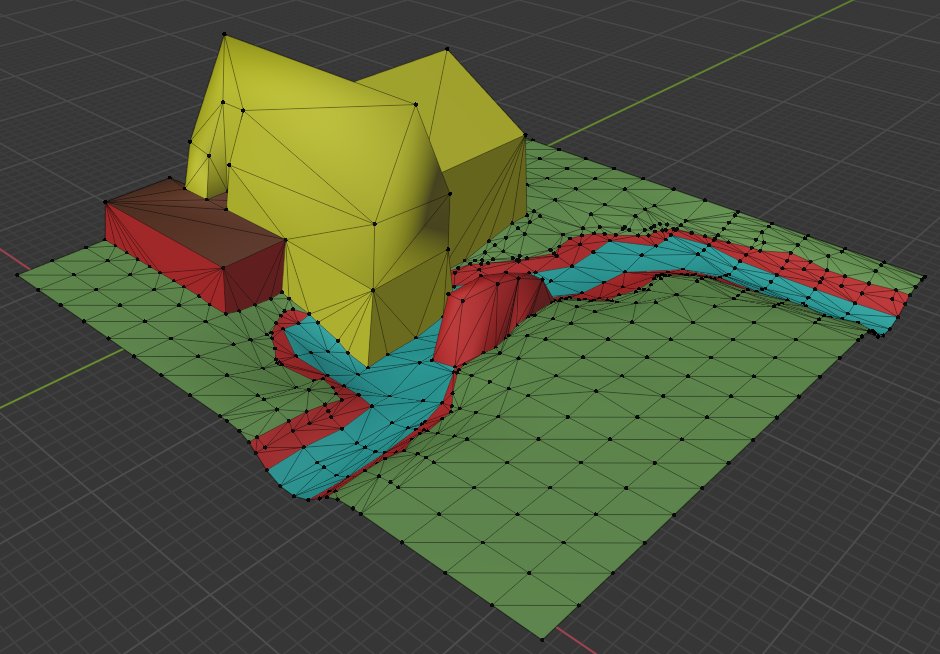 I brought that back into Gmax and “tilesliced” it.

The “dirt-idea”:
As you can see in this screen, the porch stairs lead right down onto the grass-ground: 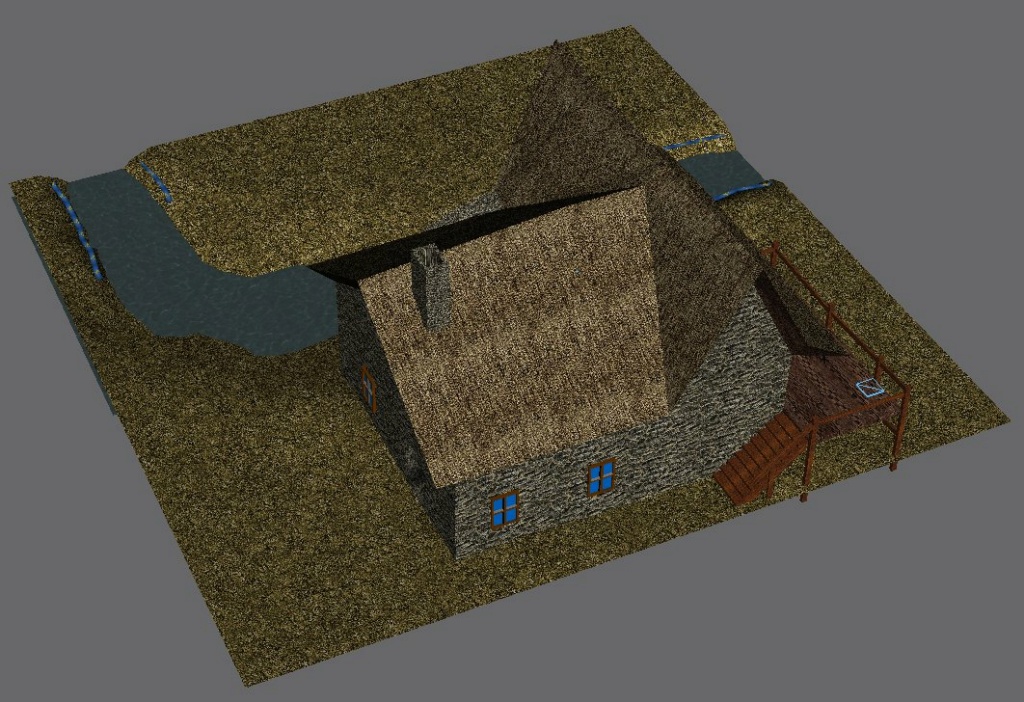 Since this group is so rough, it leaves some air for some additional shaping! I thought, a dirt path and some dirt space in front of the ground door would make sense. The original smithy group was an inspiration for this! So I came up with this layout (already in 2017): 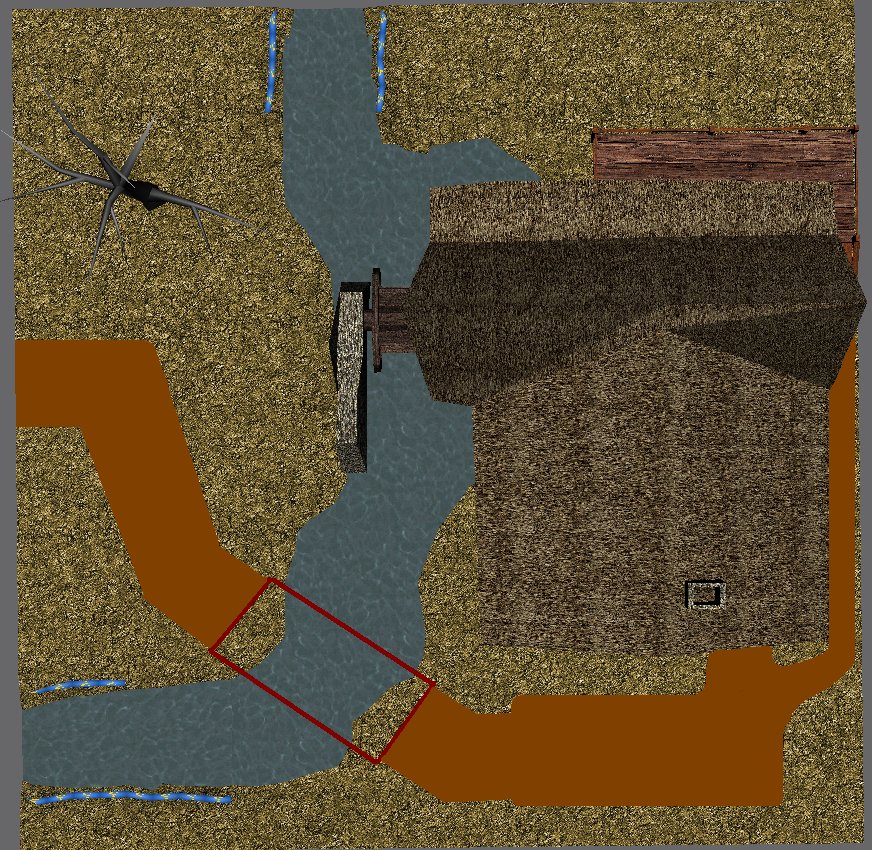 Remark: As you can see, for this idea, I moved the tree position.

But now, that I started to work on this group again, I am lacking the energy to actually add a bridge! But I kept the “dirt-idea” and made the road connection just opposite of the ground door entry: 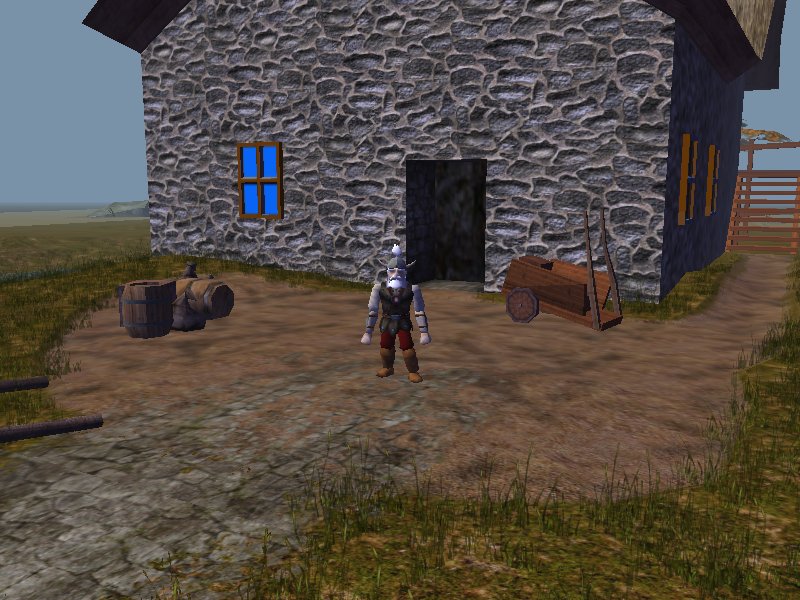 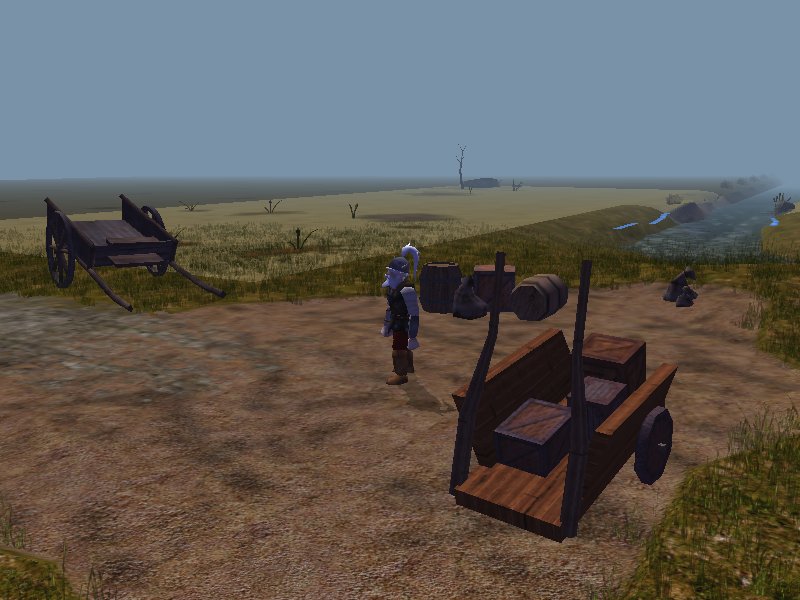 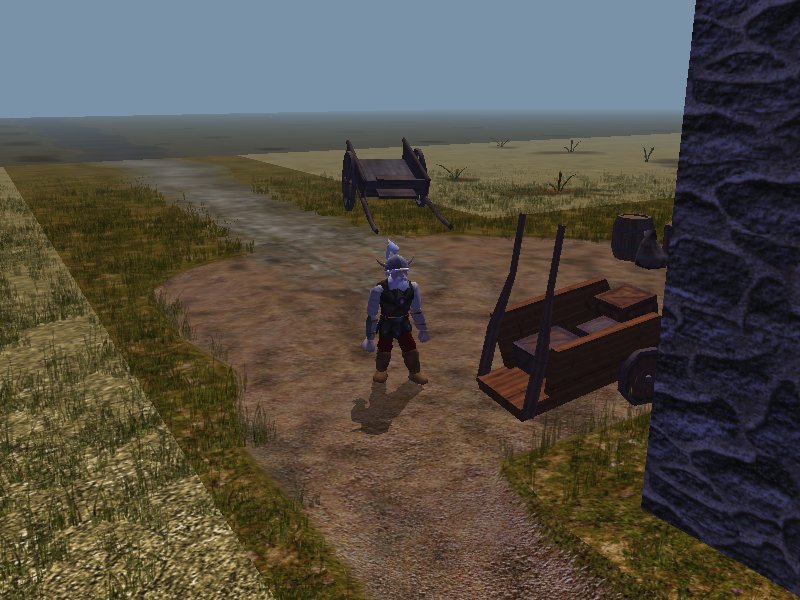 Remark: Those wagons, barrels and such are just placeables!

Well, with this approach, I’ll be able to place the tree back on it’s original position.

This is the end of part 1 of the mill report. ATM I’m working on the river bed. I’ll continue this post, when I have more results.
Top

Mill part 2:
So I got the river bed done and I have to say, it was a little UVW-challenge to me with all those widenings, bends and narrow parts! The texture is a TNO one (DLA worked on TNO after dropping Dragonlance and I found an early TNO set within the various Solace set versions) and the creator has done a very good job IMO: It has lots of detail, but also enough “noise”, so the eye doesn’t really see, if there is a little bit of patchwork on some connecting faces. Together with the animated and shiny water texture, I’d say, that it’s not noticeable at all. So I’m pleased with the current stage. Here are some result screens: 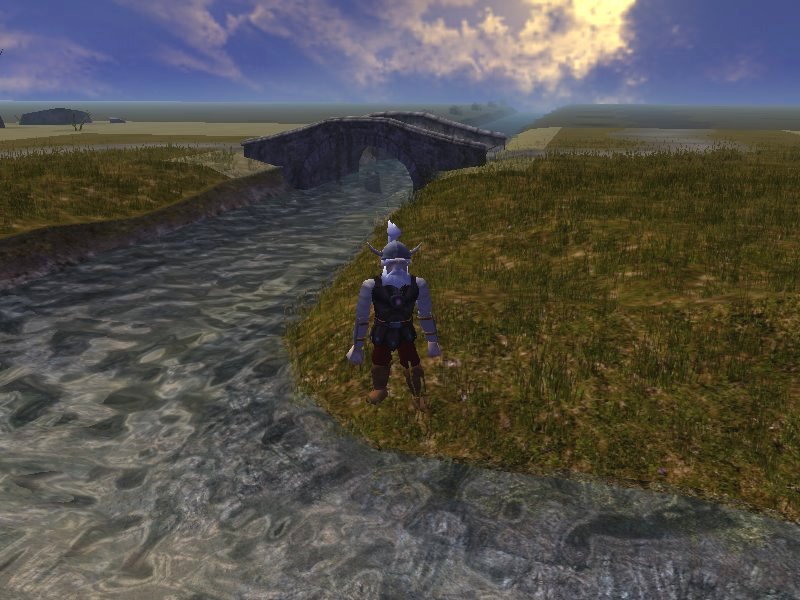 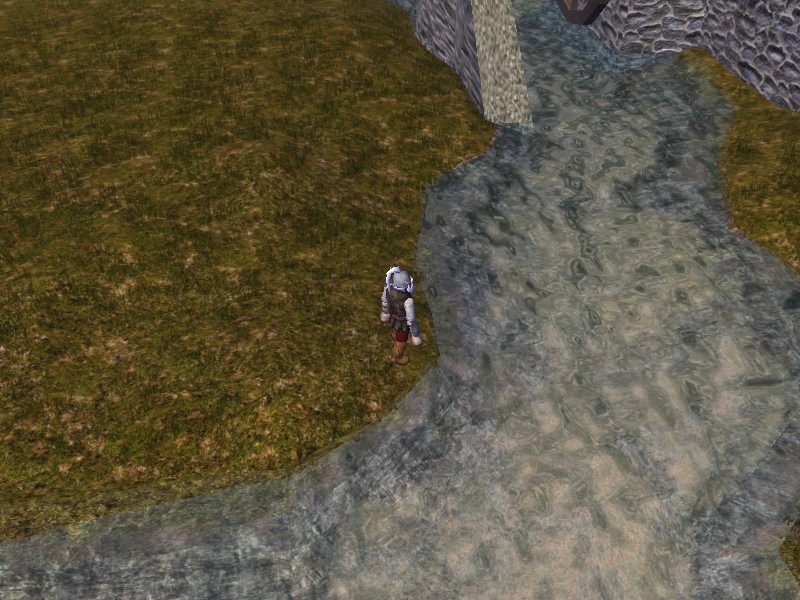 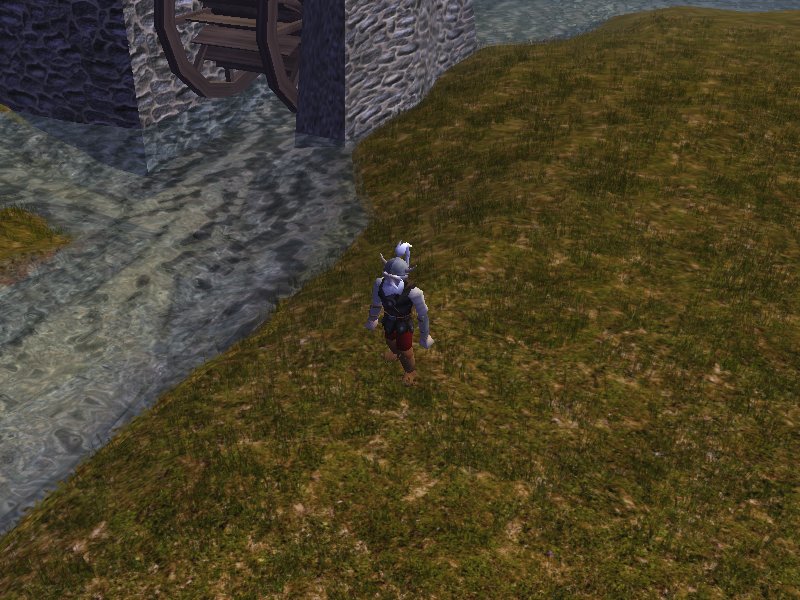 Mill part 3:
So I got distracted again (see post on the neverwintervault.org-forum), but I picked up again and made good progress:
I decided to keep the stone wall texture (same as on the smithy). I think, it fits, because some parts of the mill are in touch with water and I found no evidence on the mesh, which would tell, that some wall parts may even contain wood frames (as to be seen in the Solace tree houses). So I applied a clean UVW to all wall sections.
Also did I decide to stick to the standard Solace roof texture (as you can see in the previous screens, I tested thatch textures before. The UVW on the roof is finished, too. 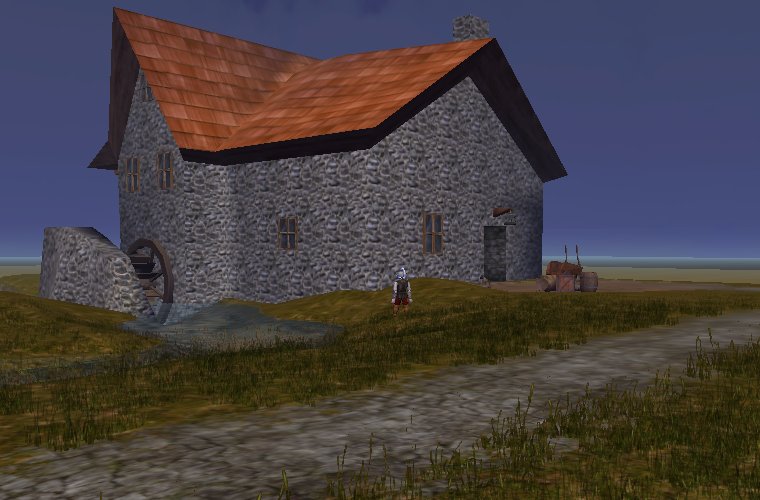 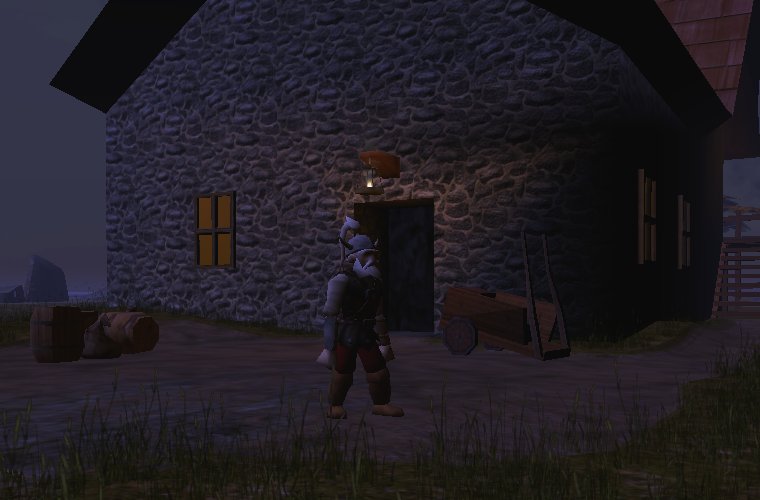 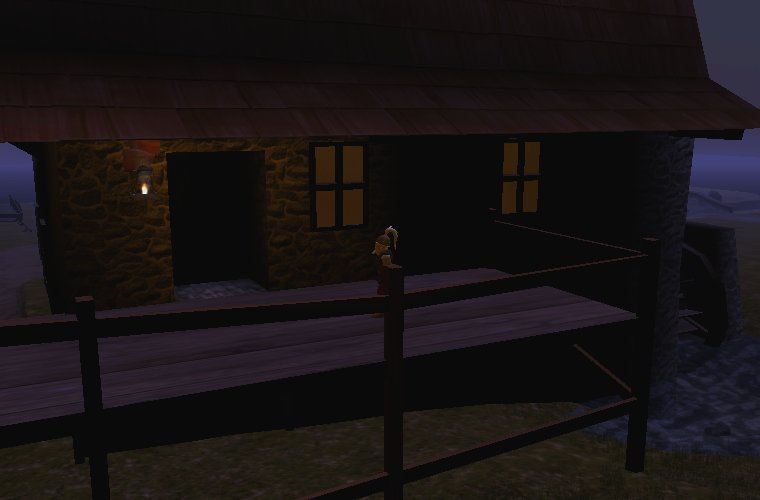 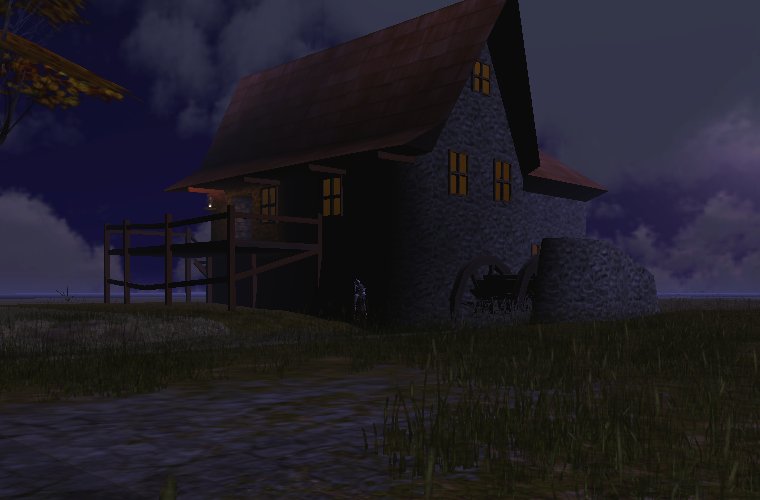 Also the mill wheel is animated now. To be honest: I “borrowed” the animation from the TNO-mill and that worked nicely:

Well, I’m VERY tempted to add a few things, like a hatch in the gable with a little crane, but I think, since my main aim is to preserve, I will not do that.

So, what is left for this group? I will test the gables with the standard gable texture. The wood texture of the water wheel and the porch are still temporary and may need some UVW, after deciding an a final texture. And, of course, the tree. But here, I’m going to re-import the branches and leaves from Meggins, since I assume, that the creator of Meggins and the mill is the same person - though I have no evidence for that. (Remember: Both are the latest findings to the set and both were very unfinished - here also see the posts on Meggins).
The group also needs quiet a few little adjustments here and there, but I’d say, I’m on the home straight!

Mill part 4:
June is a hell of a month regarding workload for me and I was in the mood to do a last minute chime in for the anniversary CCC of the vault. Now picked up again on the Solace project.

I finally went fro the tree. As written before, in the original scene, it kept on “exploding” on me and the NWmax-Reset-Xform didn’t always fix this. So I pushed the tree all the way to the end. I now have it recovered and working IG: 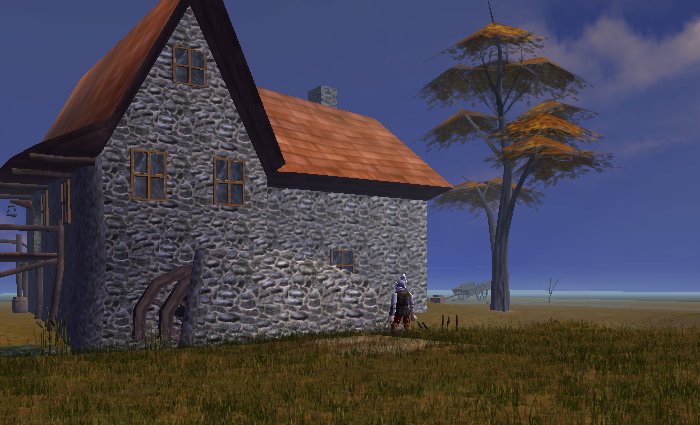 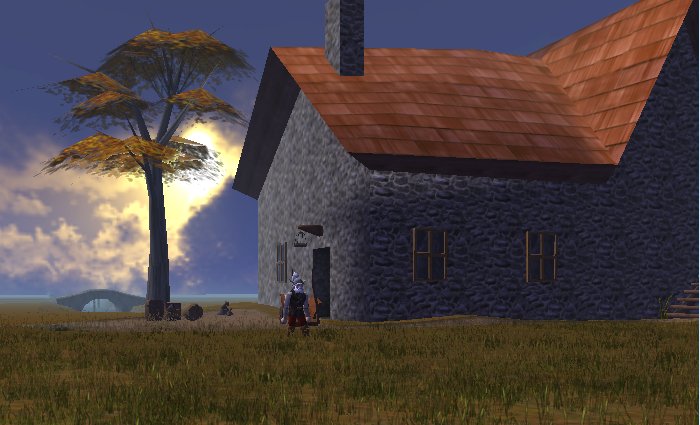 There was no canopy mesh in the scene, so I first tried the one from Meggins (still assuming, that Meggins and Mill are the same authors), but that didn’t look fitting. So, at the end, I used the leaves meshes I also used for the Solace tree houses (see post on the leaves), But I kept one set of small branches of Meggins:

And I started to add some details like grass and water plants (which I copied over from water terrain tiles of this set): 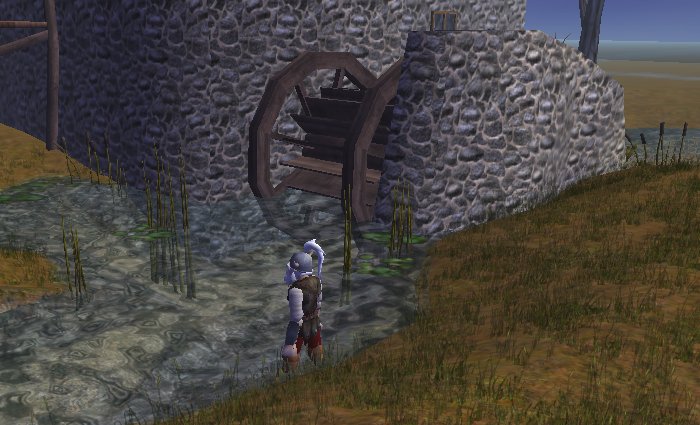 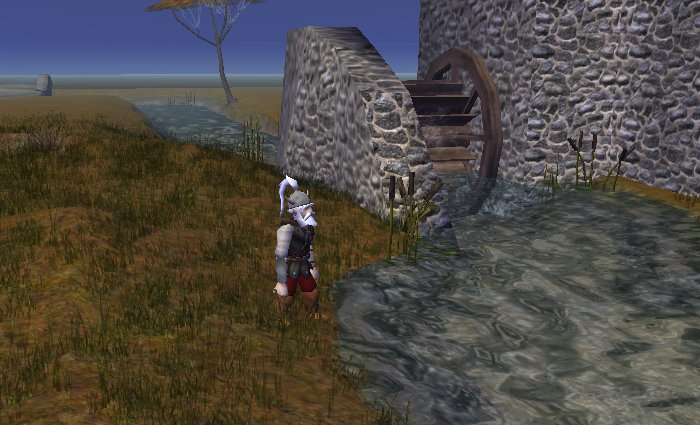 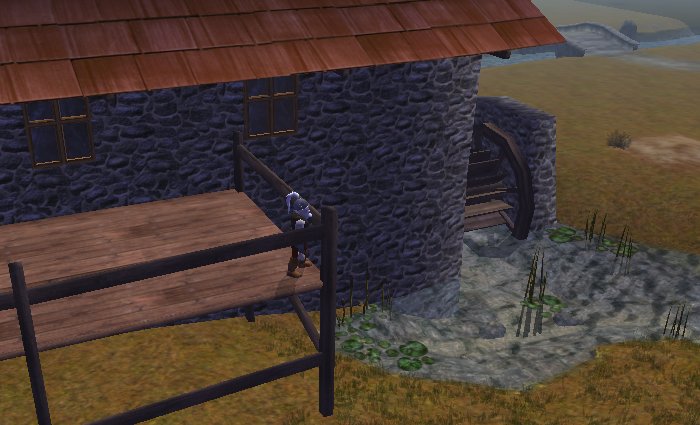 Regarding the roof overhang:
I did a test using the standard texture, which is to be found on all the tree houses, but in the end, I decided, that it doesn’t look to well on the mill, because the overhang is pretty irregular. And I didn’t want to change the original geom, so I went back to a wooden plank texture.

So, I’m getting close to finishing the mill…
ATM, I’m slicing certain parts, so I can generate working minimaps. The set file still needs the door positions. And I have to work on the shadows.
Top
Post Reply
4 posts • Page 1 of 1